George A. Romero, ‘Night of the Living Dead’ creator, dies at 77

It was the night of April 4, 1968, and George A. Romero was driving to New York City from Pittsburgh on a mission: In the days to come he was to meet with film studios in hopes that one might buy the horror film he was lugging in his trunk, “Night of the Flesh Eaters.”

None of the studios was interested, but Romero still managed to get his $114,000 film in front of audiences that year. And though critics panned the picture, retitled “Night of the Living Dead,” moviegoers were mesmerized — packing theaters, hitting the drive-ins in droves and making Romero the father of the modern movie zombie. Romero’s “Living Dead” franchise went on to create a subgenre of horror movie whose influence across the decades has endured, seen in movies like “The Purge” and TV shows like “The Walking Dead.”

Romero died Sunday in his sleep after a “brief but aggressive battle with lung cancer,” according to a family statement to The Times provided by his longtime producing partner, Peter Grunwald. He was 77.

Romero died while listening to the score of one his favorite films, 1952’s “The Quiet Man,” with his wife, Suzanne Desrocher Romero, and daughter, Tina Romero, at his side, the family said.

Romero will be remembered best for co-writing (with John A. Russo) and directing “Night of the Living Dead,” which showed later generations of filmmakers such as Tobe Hooper and John Carpenter that generating big scares didn’t require big budgets. “Living Dead” spawned an entire school of zombie knockoffs, and Romero’s own sequels were 1978’s “Dawn of the Dead,” 1985’s “Day of the Dead,” 2005’s “Land of the Dead,” 2007’s “Diary of the Dead” and 2009’s “George A. Romero’s Survival of the Dead.” 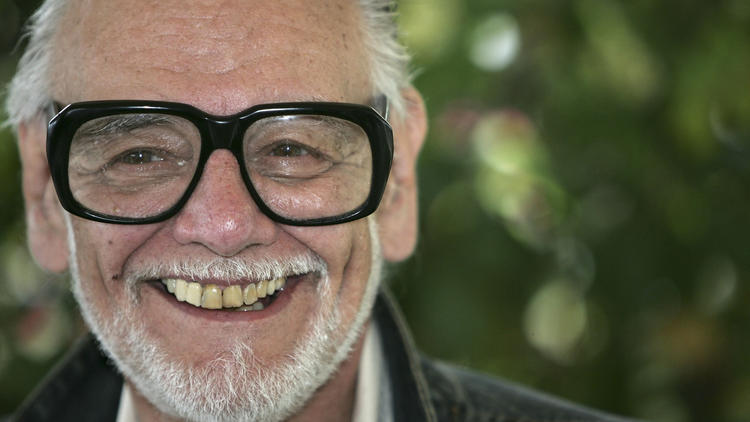 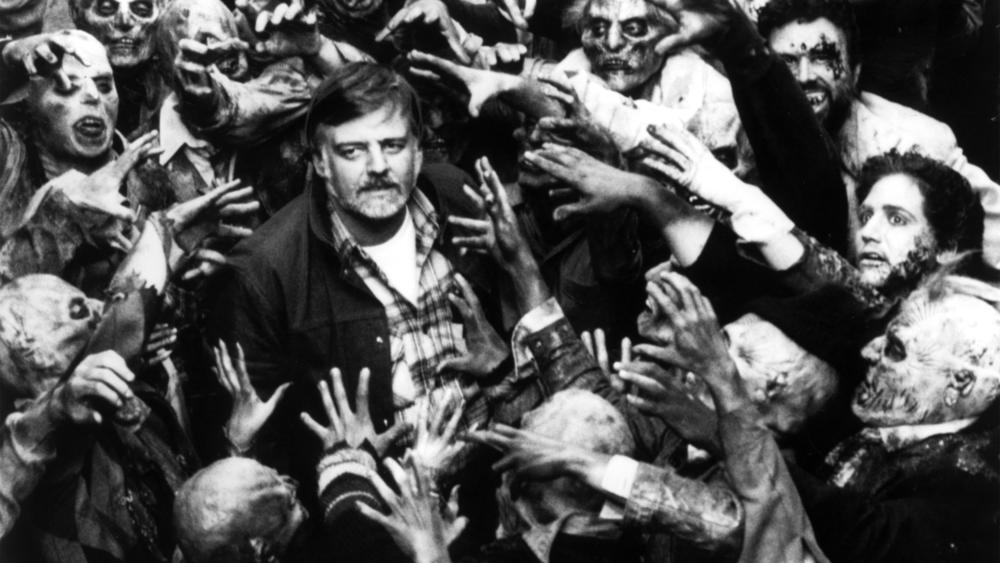 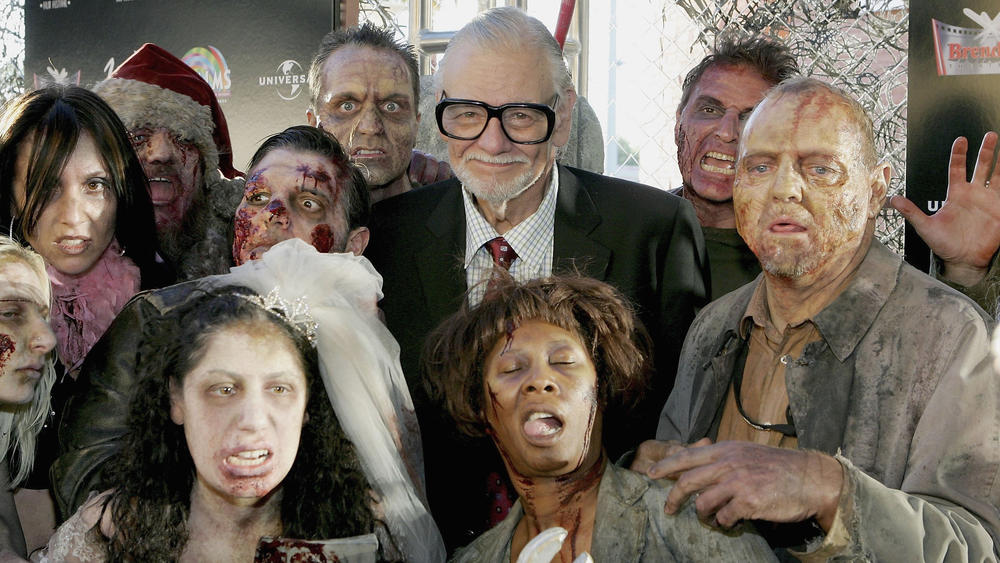 Ethan Miller / Getty Images Director George Romero is surrounded by actors dressed as zombies at the world premiere of his movie “Land of the Dead” in Las Vegas in 2005.

To get that first film made, however, Romero turned to a resourceful team of Pittsburgh TV-commercial producers. For distribution, the rookie filmmaker turned to the Walter Reade Organization, the parent of Continental Releasing, which specialized in artsy movies like John Cassavetes’ “Faces.” The director and his team got 14 prints made, handled their own promotion and opened the picture at 14 local theaters. They financed a world premiere on Halloween night.

Most critics trashed the movie, with Daily Variety citing “unrelieved sadism … which casts serious aspersions on the integrity of its makers.” But audiences loved it, and drive-in operators took out newspaper ads to apologize for turning away so many customers.

Romero once told The Times that he was surprised at critics’ reactions; he said Roger Ebert’s review all but called “Living Dead” a movie spawned by the devil.

Over time, however, fans have pointed out that, setting aside the graphic violence that made Romero’s work so distinct, there were sociopolitical messages that made his movies noteworthy, starting with the casting of that first “Living Dead” picture.

“I think the reason it got noticed was the fact that we used an African American actor in a role that didn’t need to be played by an African American actor, and then he gets gunned down by this posse,” Romero said, noting that the role was originally written for a white man. On the night of that drive to New York City, he said, “we heard on the radio that [the Rev. Martin Luther] King had been assassinated. So now all of a sudden the power of the film was ratcheted up that much more.”

“Living Dead” went on to gross upward of $50 million.

“He took the image of the zombie, which up to that point was rooted in the Caribbean and part of a black Caribbean culture, and turned it into a metaphor for all sorts of things in American culture,” said Leo Braudy, a USC professor who last year published “Haunted: On Ghosts, Witches, Vampires, Zombies, and Other Monsters of the Natural and Supernatural Worlds.”

Up to this point, Braudy said, horror movies focused on individuals like Frankenstein’s monster, Dr. Jekyll and Mr. Hyde. “The zombie is unique because it’s part of a group representing the potential threat of a mass mind,” he said.

Romero solidified his reputation as a master of the genre with the sequel “Dawn of the Dead,” which premiered in the U.S. in 1979 and became one of the most profitable independent productions in film history. The franchise would eventually encompass six films — the first four, released decades apart, are one storyline.

“‘Night of the Living Dead,’ then ‘Dawn of the Dead’ is a few weeks later, ‘Day of the Dead’ months later and ‘Land of the Dead’ is three years later,” Romero said. “Each one spoke about a different decade and was stylistically different. After ‘Land,’ I wanted to do something about emerging media and citizen journalism.”

“Night of the Living Dead” evoked Vietnam-era bloodshed and, with its black male lead trapped in a farmhouse, echoed some of the hysteria in the civil rights era. “Dawn of the Dead” poked fun at soul-deadening consumerism, and “Day of the Dead” addressed ethics in science. In “Land of the Dead,” Romero tackled safety and boundaries, showing a community fortifying itself against a murderous horde while its wealthiest citizens keep alive class divisions.

But part of what made Romero’s films so distinctive, no doubt, was their unbridled gore, which caused many of the movies to go unrated.

“I just don’t shy away from it,” he said in a 2010 interview with The Times, noting that “the old DC comic books were very, very graphic before the old Comics Code cleaned them up.

“Hard-core horror fans would like to see more and more of it. It’s the fun part. It’s the payoff. It’s the downhill dip on the roller coaster.”

“They’re just mean-spirited and Grand Guignol all the way,” he said referencing an infamous Parisian theater that specialized in naturalistic horror shows. “I don’t find any substance underlying it. I like to use horror as allegory.”

George Andrew Romero was born in the Bronx in New York City on Feb. 4, 1940. He attended Carnegie Mellon University in Pittsburgh, graduating in 1961 from the university’s College of Fine Arts. He stayed in Pittsburgh for much of his feature film career.

Between other “Dead” films he directed the 1981 film “Knightriders,” starring Ed Harris; the 1988 movie “Monkey Shines,” his first studio-produced film, which introduced him to Grunwald; and “Two Evil Eyes,” a 1990 horror film he made with Italian filmmaker Dario Argento inspired by Edgar Allan Poe short stories. His last credit as a writer was for his characters’ appearance in 2017’s “Day of the Dead” from director Hèctor Hernández Vicens.

The movies and TV shows that have taken their cues from Romero’s work — “World War Z,” “28 Days Later,” “Shaun of the Dead” — seem almost too numerous to count. And though the popularity of something like “The Walking Dead” would seem to be a compliment to Romero, he once called that juggernaut “a soap opera with a zombie occasionally.

“I always used the zombie as a character for satire or a political criticism, and I find that missing in what’s happening now,” he said in 2013.

“He remained true to his outside Hollywood roots,” he said, calling the filmmaker a “tremendous influence on the independent film industry because he didn’t have to be in Hollywood to make films that attracted wide audiences. He continues to be a lasting example of the idea that Hollywood needs to be reenergized from outside, independent perspectives.”

Romero is survived by his wife, his daughter, his son Andrew Romero and, from his earlier marriage to Christine Romero, his son Cam Romero. 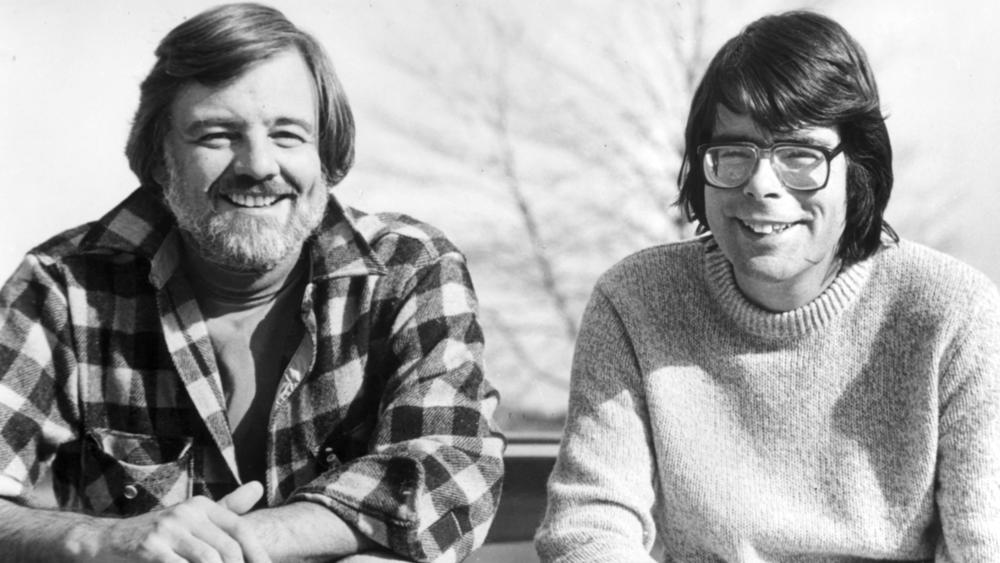 Warner Bros. Director George Romero and Stephen King on the set of their first movie together, “Creepshow.” 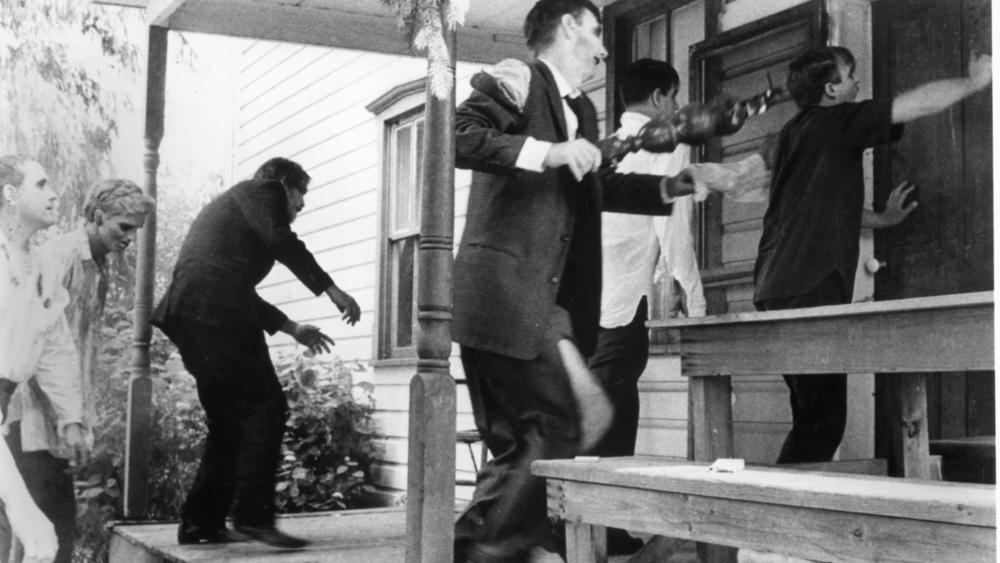 A scene from 1968’s “Night of the Living Dead,” directed by George Romero. 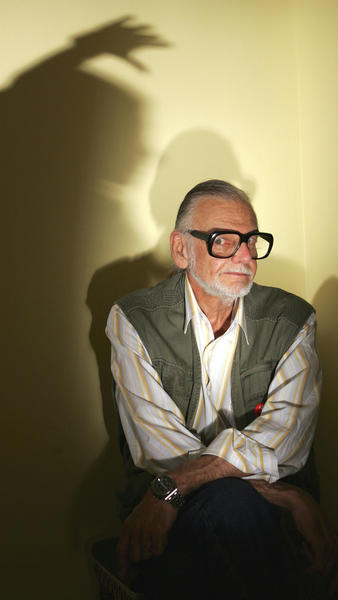 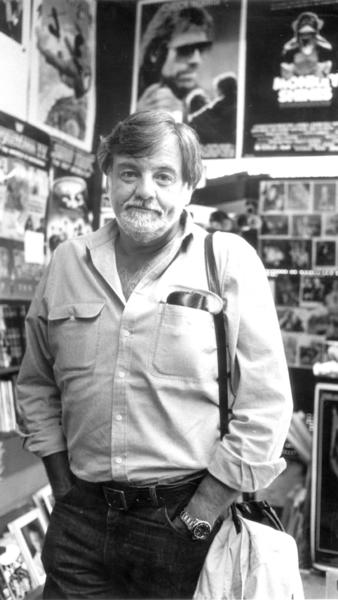 Michael Edwards / Los Angeles Times Director George Romero in the lobby of the Hollywood Book and Poster Shop in 1988. 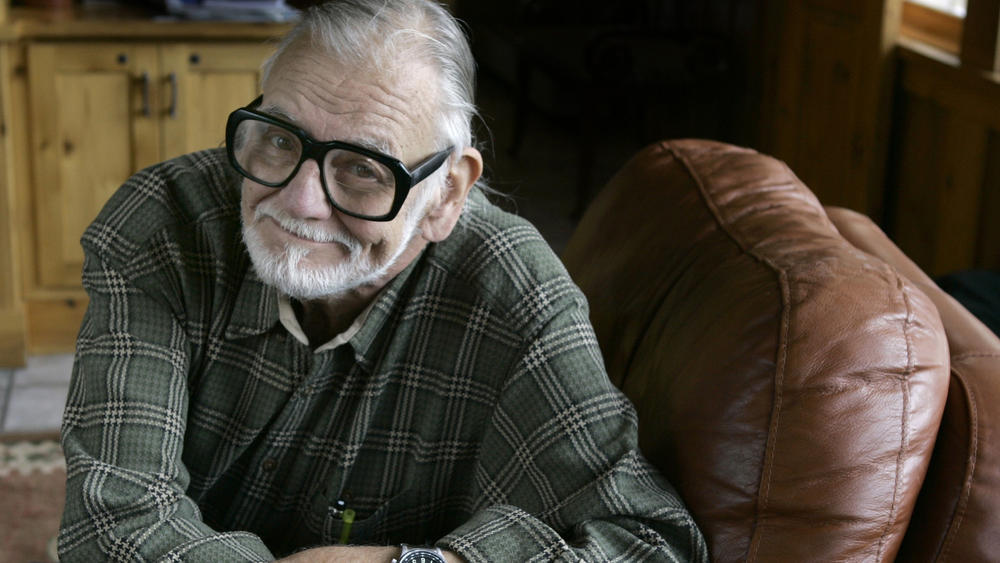 Amy Sancetta / Associated Press George Romero poses for a photograph while talking about his film “Diary of the Dead” at the Sundance Film Festival in 2008. 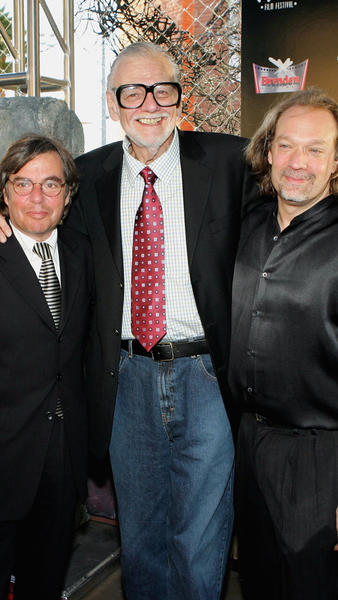 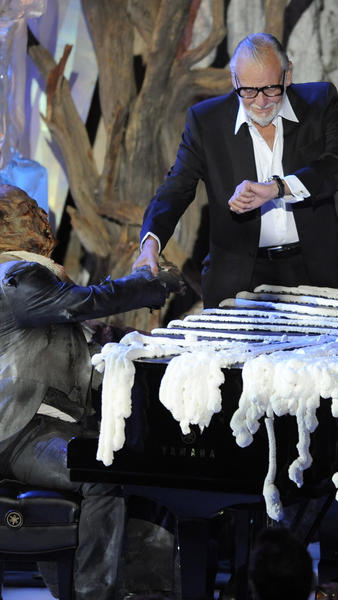 Chris Pizzello / Associated Press George Romero on stage with a zombie piano player at the Scream Awards in Los Angeles in 2009. 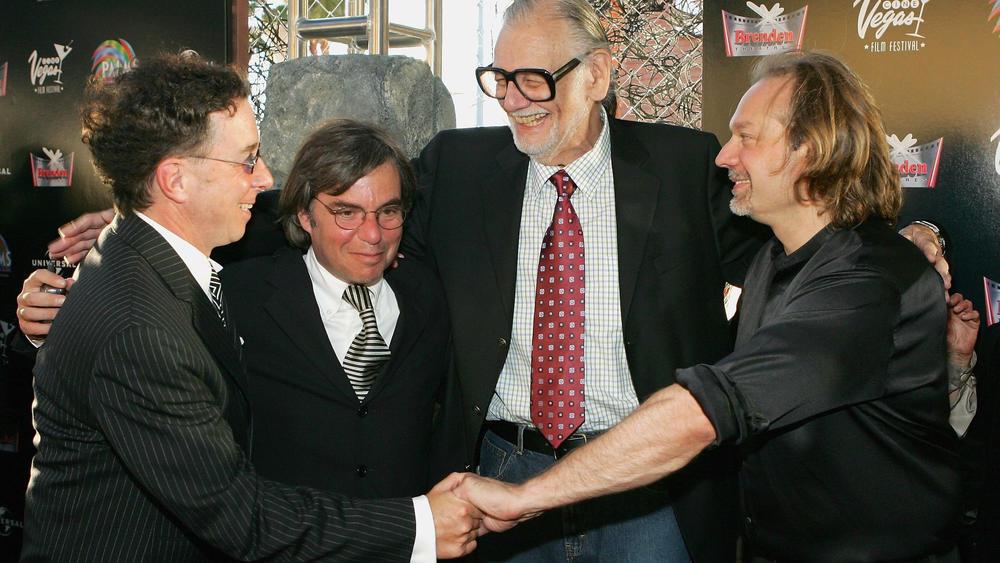 Leave Your Comments Below Cancel reply